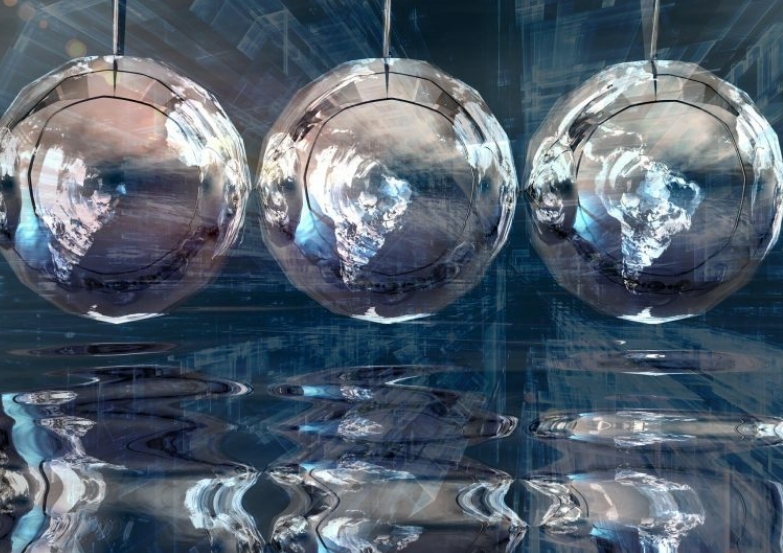 Technion researchers have found an effective solution to the famous age-old, three-body problem in physics.

The three-body problem is one of the oldest problems in physics: it concerns the motions of systems of three bodies – like the Sun, Earth, and the Moon – and how their orbits change and evolve due to their mutual gravity. The three-body problem has been a focus of scientific inquiry ever since Newton.

When one massive object comes close to another, their relative motion follows a trajectory dictated by their mutual gravitational attraction, but as they move along, and change their positions along their trajectories, the forces between them, which depend on their mutual positions, also change, which, in turn, affects their trajectory et cetera. For two bodies (e.g. like Earth moving around the Sun without the influence of other bodies), the orbit of the Earth would continue to follow a very specific curve, which can be accurately described mathematically (an ellipse).

However, once one adds another object, the complex interactions lead to the three-body problem, namely, the system becomes chaotic and unpredictable, and one cannot simply specify the system evolution over long time-scales. Indeed, while this phenomenon has been known for over 400 years, ever since Newton and Kepler, a neat mathematical description for the three-body problem is still lacking.

In the past, physicists – including Newton himself – have tried to solve this so-called three-body problem; in 1889, King Oscar II of Sweden even offered a prize, in commemoration of his 60th birthday, to anybody who could provide a general solution. In the end, it was the French mathematician Henri Poincaré who won the competition. He ruined any hope for a full solution by proving that such interactions are chaotic, in the sense that the final outcome is essentially random; in fact, his finding opened a new scientific field of research, termed chaos theory.

The absence of a solution to the three-body problem means that scientists cannot predict what happens during a close interaction between a binary system (formed of two stars that orbit each other like Earth and the Sun) and a third star, except by simulating it on a computer, and following the evolution step-by-step. Such simulations show that when such an interaction occurs, it proceeds in two phases: first, a chaotic phase when all three bodies pull on each other violently, until one star is ejected far from the other two, which settle down to an ellipse. If the third star is on a bound orbit, it eventually comes back down towards the binary, whereupon the first phase ensues, once again. This triple dance ends when, in the second phase, one of the star escapes on an un-bound orbit, never to return.

In a paper recently published in Physical Review X, Ph.D. student Yonadav Barry Ginat and Professor Hagai Perets of the Technion-Israel Institute of Technology used this randomness to provide a statistical solution to the entire two-phase process. Instead of predicting the actual outcome, they calculated the probability of any given outcome of each phase-1 interaction.

While chaos implies that a complete solution is impossible, its random nature allows one to calculate the probability that a triple interaction ends in one particular way, rather than another. Then, the entire series of close approaches could be modeled by using a particular type of mathematics, known as the theory of random walks, sometimes called “drunkard’s walk.” The term got its name from mathematicians thinking about a drunk would walk, essentially of taking it to be a random process – with each step the drunk doesn’t realize where they are and takes the next step in some random direction. The triple system behaves, essentially, in the same way. 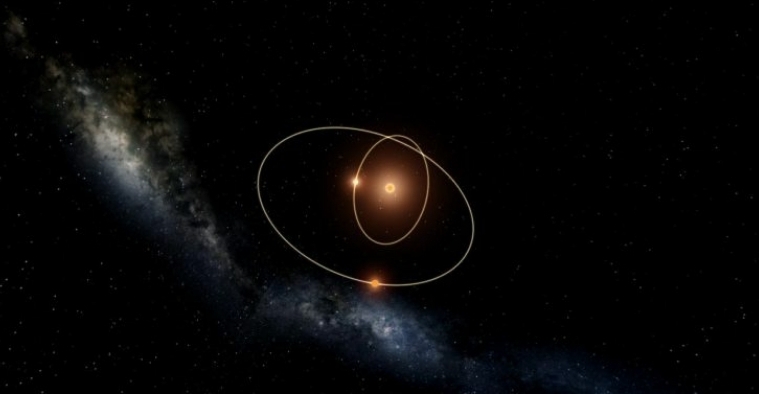 After each close encounter, one of the stars is ejected randomly (but with the three stars collectively still conserving the overall energy and momentum of the system). One can think of the series of close encounters as a drunkard’s walk. Like a drunk’s step, a star is ejected randomly, comes back, and another (or the same star) is ejected to a likely different random direction (similar to another step taken by the drunk) and comes back, and so forth, until a star is completely ejected to never come back (and the drunk falls into a ditch).

Another way of thinking about this is to notice the similarities with how one would describe the weather. It also exhibits the same phenomenon of chaos the Poincaré discovered, and that is why the weather is so hard to predict.

Meteorologists, therefore, have to recourse to probabilistic predictions (think about that time when a 70% chance of rain on your favorite weather application ended up as a glorious sunshine in reality). Moreover, to predict the weather in a week from now, meteorologists have to account for the probabilities of all possible types of weather in the intervening days, and only by composing them together can they get a proper long-term forecast.

What Ginat and Perets showed in their research was how this could be done for the three-body problem: they computed the probability of each phase-2 binary-single configuration (the probability of finding different energies, for example), and then composed all of the individual phases, using the theory of random walks, to find the final probability of any possible outcome, much like one would do to find long-term weather forecasts.

“We came up with the random walk model in 2017, when I was an undergraduate student,” said Mr. Ginat, “I took a course that Prof. Perets taught, and there I had to write an essay on the three-body problem. We didn’t publish it at the time, but when I started a Ph.D., we decided to expand the essay and publish it.”

The three-body problem was studied independently by various research groups in recent years, including Nicholas Stone of the Hebrew University in Jerusalem, collaborating with Nathan Leigh, then at the American Museum of Natural History, and Barak Kol, also of the Hebrew University. Now, with the current study by Ginat and Perets, the entire, multi-stage, three-body interaction is fully solved, statistically.

“This has important implications for our understanding of gravitational systems, and in particular in cases where many encounters between three stars occur, like in dense clusters of stars,” said Prof. Perets. “In such regions many exotic systems form through three-body encounters, leading to collisions between stars and compact objects like black holes, neutron stars, and white dwarves, which also produce gravitational waves that have been first directly detected only in the last few years. The statistical solution could serve as an important step in modeling and predicting the formation of such systems.”

The random walk model can also do more: so far, studies of the three-body problem treat the individual stars as idealized point particles. In reality, of course, they are not, and their internal structure might affect their motion, for example, in tides. Tides on Earth are caused by the Moon and change the former’s shape slightly. Friction between the water and the rest of our planet dissipates some of the tidal energy as heat.

Energy is conserved, however, so this heat must come from the Moon’s energy, in its motion about the Earth. Similarly for the three-body problem, tides can draw orbital energy out of the three-bodies’ motion.

“The random walk model accounts for such phenomena naturally,” said Mr. Ginat, “all you have to do is to remove the tidal heat from the total energy in each step, and then compose all the steps. We found that we were able to compute the outcome probabilities in this case, too.” As it turns out a drunkard’s walk can sometime shed light on some of the most fundamental questions in physics. 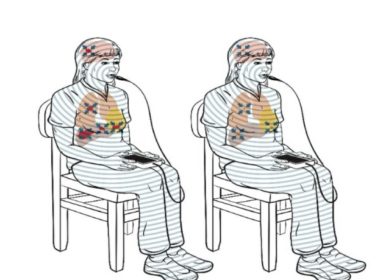